Music is such a part of our lives and can really help us prepare for the holidays we want to celebrate throughout the year. Learn about, listen to, and do activities with various songs and music which relate to holidays such as New Year's Day, St. Patrick's Day, the Fourth of July, Veterans Day, Thanksgiving, and Christmas! Also included are fun music lessons for special days such as Star Wars Day/May the Fourth, Talk Like a Pirate Day, and Dr. Seuss Day!

Each of the 36 lessons includes:

Note: Music for Holidays & Special Days is aimed mostly toward Americans since many of the holidays and special days included are uniquely American.

On November 11 each year we celebrate Veterans Day in America. It's a special day to remember all who have served in the Armed Forces. Enjoy today's Music Lesson for Veterans Day and take some time to celebrate those who worked to allow us to be free!

This first video goes through all 5 of the Armed Forces with their special song or hymn. Choose your favorite and sing along with it--the words are on the screen!

Short Lesson about "The Army Song"

Here is a lesson about the Army Song from a 30-year retired veteran and Military Musician (trombone player and eventual Band First Sergeant) who is now a band director at a K-8 Christian School. She said that the above version of "The Army Song" has incorrect lyrics. Most non-military sites use a very old rendition from the original march “Caissons Go Rolling Along”, but the words were changed several decades ago, and it’s called "The Army Song” now. About 10 years ago they updated it to include the opening verse, but the Chorus and Refrain is what is sung to the original familiar tune. She said, “I’m just sharing with people who don’t know in an effort for more people to learn the official and correct version we Army Soldiers know and love!”

Refrain:
Then it’s hi! hi! hey!
The Army’s on its way.
Count off the cadence loud and strong;
For where’er we go,
You will always know
That The Army Goes Rolling Along.

A Dance for Veterans Day

In this next video, we watch a dance which tells the story of a veteran and his family.

(Caution: This is an absolutely beautiful and amazing performance, but it does tell a sad story. I cry every time I watch it. If this is a sensitive topic for your family, you may want to skip this one.)

Our last two videos are songs sung by children which give tribute to the wonderful men and women we honor on Veterans Day.

If you would like some more resources to help you study Veterans Day, see the following links: 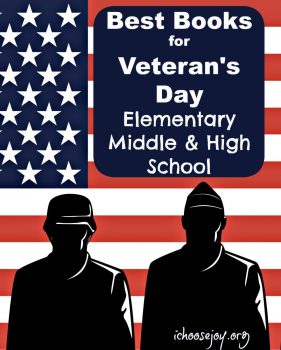